I seem to have spent the first week of retirement “chasing my tail ” as ever, but it is quite nice that I can choose pretty well when I  “do stuff”.  It is my resolve to undertake certain things everyday: mentally I have made a list and, I suppose, a ration of daily housework should be included!  GOS expressed the view “I should have more time for washing up now”.  I cannot complain too much as, in between golf, he is painting the woodwork on the front of the house.

My  own painting has gone out of the window this week. I have been picking fruit and veg as much as possible, not to let it waste.   The first of the courgettes are coming; unfortunately, I have let the mangetout go past their best, but  the runner beans aren’t far off. There as been masses of salad crop – had several cucumbers out of the poly-tunnel and 3 tomatoes!  I have cut back on the number of fruit bushes drastically, but I have still had a good crop of currents and a friend picked all the gooseberries as I still have some from last year in the freezer.  With the recent rain the vegetable garden seems to have caught up: the season was  so slow to start. 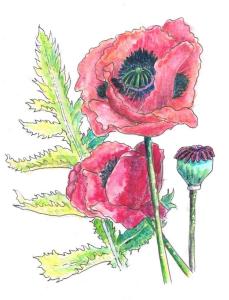 I have set up my craft ietms for sale  in the “vintage” shop this week, where I had been offered space.   I had to get items ready, priced etc., which took some time.   Made some aprons as well,  which I am quite pleased with.  I have had some material printed with some of my designs and have included “poppy ” patches on the pockets of the pinnies .  (  I have masses of poppies in the garden, a real blousy show of red, but a short lived spectacle as they always seem to get rain- battered and floppy.  They seed prolifically and the consequent seedling have to be disposed off ruthlessly or they would take over.)

Talking of poppies: on Sunday “choir” participated in an outdoor memorial service to commemorate the local reservists that served in the First World War.  We were singing a specially commissioned pieces for the service,  It was quite an event – the organisers having engaged a pipe band, a display of vintage army vehicles, the Rorke’s Drift re-inactment society and a small group of Chelsea Pensioners had come “home”;  bused up from London to join in.  They looked amazing sitting in the market square in their brilliant poppy-red uniforms; thoroughly enjoying the show. Poppies being out of season, 100 hundred red roses were laid on the memorial steps by relatives of the remembered.

We are looking after a friends little Jack Russell this week.  She is getting on in years and spends quite a lot of the day asleep. However, last night when she was strolling round the farm yard the recently hatched baby chicks, about 20 weeks old now I guess, decided to follow her, as,  anyone coming into the yard is usually a source of food.  Poor little dog was totally disconcerted by this little gaggle of chickens trotting after her; round and round in circles, until she got fed up and scuttled back in to the safety of the house.