I thought it was about time I got down to getting up to date on my blog. I have had a very busy September. ( August ended badly with me frightening the family by having 8 hours in A&E with chest pain {convinced I was having a heart attack!} after a strenuous  walk, here,  in the Black Mountains.  However, it would appear to be something gastric- been a bit below par since and waiting “tests”)

But then early September and a sojourn in Switzerland put me right -I had a glorious week in the Autumn sunshine. Sunshine and mountain air what more could you want. It only rained the last morning before I flew back, which  meant  we abandoned our plans of going to the “black nosed sheep ” festival up in the mountains.   We had lots of gentle walks, mostly at 14 month’s old pace, which suited Oma admirably.  Daughter and baby came back with me to have a week in the UK with the family,  which was quite “full on” as lots of people wanted to see them.   I didn’t really have time for painting whilst I was away and only completed one sketch.

This is a little sort of animal shelter come hay barn – they are dotted all around the valley. Some stand on staddle stones, like you see in the Cotswolds, above the ground to deter the rats.  Every patch of grass round the chalets, even in town, seems to be grown long to cut for hay.  There patches always abound with wild flowers as well as grasses.   The farmers cut and dry the grass and  bundle it up by hand in sheets and transport it on their little electric wagons up to the barn – or “gaddi” as they are know there.

Life has more or  less swung back into the normal rhythm now.  GOS is out on the golf course several times a week.  His reign as “Seniors Captain” will soon be at an end.  It is quite onerous with all the admin involved.   Everything survived under his care whilst I was away in Switzerland.  I could have done without the announcement, in the car, when he  came to pick us up from the Airport that he thought the dog had fleas!  Left untreated, which meant stripping  the beds when I arrived home, washing the dog beds  and “spraying”  the poor old dog.  They seem to have vanished now anyway.

The weeds and the flower borders had gone mad in the August rain. I have been trying to have a good old sort out in the garden bit by bit.  It is full of the most glorious colour of various turning leaves – the deep red off the Virginia Creeper – the delicated pinks of the drying hydrangea paniculata.   Also trying to get to grips with the horse , as she has suddenly decided the last thing in the world she wants to do is go in the lorry. This is incredibly frustrating.

Our neighbouring farmer cut all our  hedges today.  A month earlier than normal – we are usually wondering  by November if he is ever going to come to do it.  There are so few blackberries in the hedges with us this year it doesn’t matter that the brambles are now gone early.  Normally it would grieve me to loose all that fruit.   Last year the fields abounded with blackberries; this year I have only managed to cook “blackberry and apple” once. 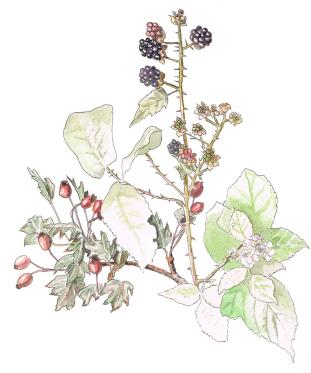 There are numerous legends associated with the bramble.  As children we were always told never to eat a blackberry after the first frost as the devil has spat on them!  Off to pick a few apples now – roast pork tonight . . . . . .