Definitely the way I feel today: hard to crawl out of the sack this morning to feed the animals and muck out.   It is really raw outside.  I snowed Wednesday after heavy rain in the afternoon and then we had a very hard frost.
That morning there were five hardy souls up the mountain on horse back; briefly we were in the sunshine but luckily came down off the mountain before the rain (which later turned to snow).  Today it is slightly warmer but very, very foggy.
I did manage to ride this morning, but the last two days I have been stymied by sheet ice up and down the road where the overflowing ditches have  frozen.  Trail Hunting on horses Saturday was abandoned in favour of quads.  The minor roads have been treacherous; the sheep are now standing in frozen muddy porridge and everything outside is hard work.  The old dog is very lazy too.  I have to force out of her basket in the mornings and push her out for a “wee”.  She does not like getting her feet wet and cold.  As soon as she is back inside, had her toast crusts, saved on the side of his plate by GOS , and a dog biscuits she sneaks back to bed.  Only to be roused again at lunch time, if she must.  Although if it is Sunday and we are scheduled to walk with her friends, she seems to know and is raring to go.

Below is a little watercolour sketch of one of “Sue’s” friends, “Fudge”.  This was  done for her “mum” for Christmas.  She is the strangest little Jack Russell with very big sticking up ears.  She often comes to stay and she thinks this is her second home.  I swear she knows everything you say; much brighter than my old mut.

The Jack Russell Terrier was developed in Devonshire, England, in the early 1800’s. In 1819, a young John (Jack) Russell was wandering the Oxford University campus shortly before he was to sit for an examination for which he apparently was ill-prepared. He came across a milkman accompanied by an unusual, but adorable, terrier bitch. Russell found her so delightful that he bought her on the spot and named her “Trump.” Trump became the foundation for the Jack Russell Terrier breed. Based upon her appearance (which was similar to a Wire Fox Terrier but with shorter legs and a wider skull), Trump is thought to have been a cross between a Black-and-Tan Terrier and a Fox Terrier.

After Mr. Russell graduated from Oxford, he bred Trump to create a terrier tall enough to keep up with his hunting foxhounds, but small enough to go to earth and bolt a fox from its den. He deliberately avoided introducing so-called “killer blood,” because he wanted his dogs to set the fox running above ground rather than kill it below ground and ruin the chase. He bred for consistency in temperament, not for consistency in looks. It is thought that he introduced Fox Terriers and perhaps Beagles into the mix. His terriers were also distinctive because they were primarily white, with minimal tan and/or black markings mainly on the head and rump.

After Mr. Russell’s death, his dogs and their descendants became hugely popular with sportsmen, and supposedly were crossed from time to time with Dachshunds, Corgis and assorted toys and terriers, causing considerable variation in size, shape and type. This variability made the breed ineligible for acceptance by The Kennel Club (England) for the show ring, despite being one of the most popular breeds in the British Isles. Breed enthusiasts formed their own Jack Russell Terrier Club of Great Britain in 1974 and organized their own competitive shows.

Getting back to the awful weather…..  its nothing to what Leanardo Decaprio’s character went through in the recently released film  that is showing locally  – GOS and I took ourselves off to see “The Revenant” last night.  After all the rave reviews we thought it would be a good film to watch.  Seems the director took filming  to 3 different locations to get enough snow for his visualisation of the grim reality of fur trapping back in 1823.  It is all based on a real person, who having been mauled by a grizzly bear, trekked 3,000 miles across North America.

(not one of my illustrations!)

We did have one “farming” highlight this week.  I have had another broody hen; one of last May’s hatching, a little dark brown chicken.   Having got fed up with hauling the miscreant back to the hen house every night for weeks from her hidey hole , I left her to it in one of the stables 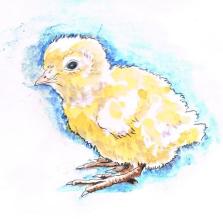 Lo and behold Friday morning she appeared with a baby chick.  This little mite had got itself into trouble behind one of the sheep pen barriers in a hole, but was duly rescued by myself and mother and chick are now, hopefully, safely in one of the other sheds and appear to be doing well.  I sincerely hope it is a female.   Currently it is surviving on crushed up rice crispies, porridge oats and ground up wheat.  It is truly amazing how independent these little fellows are straight from hatching.  They just need Mum to keep them warm and cosy.

It was GOS’s birthday on Friday and today I took him for lunch to the very smart hostelry in a near by village.  Must say we had a splendid meal; the food is just that little bit different.  It was a real treat.  Lovely atmosphere  enhanced by live music in the lounge.  I am not a huge pudding fan,  but I did have a dessert today and the “chocolate parve  with marron glace” was divine.

However, we had not been in home long, when the phone went and it was my long ago, retired blacksmith’s sister to tell me he had died suddenly today.  Seems he must have had a heart attack this morning going outside to start the car.  Luckily a neighbour spotted him being taken ill and he was not left in the garden for hours until someone found him.  This old, batchelor chap was really one of life’s characters.  Known to all as “Len the Black” he had lived life to the full until his health started to slow him up.  He was still shoeing for me in his 70’s.   This is no mean feet as it is a very hard physical job.  A great follower of the “GGs”, both ” proper” racing and  harness racing.  This love had taken him to many parts of the globe.   (First language welsh he had commentated on “Rasus” for S4C on occasion)  He was fond of a bevvy or two and for  a period was banned from driving. This meant me fetching him from his home to come and shoe and returning him after; about a 60 mile round trip!  A bit later it got to a point where, because of his health,  he could only shoe 2 hooves at the back  one week and then would return to do the two front feet  on my horse the following week.  After a year or so of this, plus he was also caring for his very elderly step father, we both agreed perhaps it was time to retire as my farrier, but we continued to keep in touch. Although first language welsh he had always written doggerel poetry in English.  This was very colourful and entertaining;  popular in his local community and time upon time he would be called upon to celebrate some local event; wedding, funeral, whatever; in verse.  He recently sent me a tea towel with one of his verses on celebrating a local church anniversary.  God bless him. I imagine it will be a very big funeral as he will be much missed by his large family and many friends.

When I retired from work I volunteered to do a few mornings a month in one of the charity shops in town.  They raise funds  for hospices in the area.  By coincidence a friend from way back is one of the part-time managers.  Her son and mine were best buddies in primary school from age four, but both now gone there different ways. ” G” staying and working in agriculture, like the rest of his family,  and my son up in London.    It is a most enjoyable morning in the shop; nothing too onerous, some lovely ladies to work with,  some interaction with the public and at the end of the day, hopefully,  one has contributed to something useful.   I am getting to know the “regulars” who come  to seek out the bargains,  but so far  I am mostly disgorging plastic bags full of “donations” in the back of the premises: checking and pricing stuff.  I have been let loose with the till a couple of times, which  looks something a bit like the “Open all Hours” till, but my colleagues assure me it won’t bite.

Why was everyone seemingly disposing of their handbags last week!!  We had several donation bags left, all full of unwanted handbags.  Perhaps it is a seasonal thing!

I have to do a bit of sorting out at home. . . . .   I have got rid of a lot of my ~”office” clothes, but really need to get stuck in to a good old clear out:  before the weather improves and the lure of the garden calls.