. . . . . the next in a series of Atlantic storms is  battering us I write this.  90m an hour winds have been recorded at lunchtime in Pembrokeshire according to the news and all the Irish Ferries cancelled – so there are a lot of Welshmen stuck  in Ireland following the 6 Nations game on Sunday.  ( The name Innogen is probably derived from Gaelic inghean meaning “maiden”.  However, I don’t think this Imogen is much of a maiden, quite a thug if you ask me!)

Good job the family were not scheduled to fly back to Switzerland today; the weather was bad enough going down to Bristol airport last Saturday in the wake of storm “Harry”, but a pussycat of a storm compared to this.  The family are home now after a very long day’s travelling; following the flight there is a 4hr train journey  from Geneva.  Apparently, the little one, “manma”s little helper,  is demanding to feed the “cockerels”, which was our first job outside in the morning whilst they were here.  As you can imagine, all my morning chores took an inordinate length of time with the assistance of an 18 month old, but great fun.  “Madam”,  trotting along behind with her Mum,  in her yellow rainsuit and red wellies, clutching “rabbit” who has to go everywhere with her at the moment and  rabbit has to do, in tandem,  what ever she is intent on doing.  Filling “aye” nets for the sheep with toddler size handfuls and rabbit was slow work!!!

The house is nearly back to normal  – no more tripping over dropped toys, or moving of wet washing ; most of the baby equipment and toys are  stowed away and the washing done.  It  is  incredibly quiet for me and “bampa”!  “Dod” (dog) no longer has the bonus of dropped crusts and other titbits chucked, very knowingly for entertainment value,  from the highchair. “Miaow” can sleep in peace in any chair she chooses; no longer expected to sleep in an upturned stool (an improvised cot) with rabbit!

To get to Bristol we travel part of the M4 and use the second Severn Crossing.  It doesn’t matter how many times I use the bridge it always manages to impress.  it is a magnificent structure spanning the vast expanse of the Bristol Channel.  Going down and back to Bristol twice in the last week the tide was way, way out both times providing me with endless, fascinating views of mudflats, seaweed strewn rocks and the central swirling waters. It is amazing to think how anything could be built just using the hours of low tide to work on the piers that support it.  The first proposal for a Severn Bridge was made by Thomas Telford in 1824, in more or less the spot where the first Severn Bridge stands now, in an endeavour to speed the coach journey  from Wales to London.  For various reasons this bridge never materialised.  The Government resurrected the idea after an enquiry in 1946,  but it was not until 1961, following the Forth Bridge go ahead, that work began in earnest and the first Severn Bridge was opened by the Queen in 1966.  I can remember back in the early 1970’s (pre-children) travelling up to Surrey to stop with friends on a very stormy night  and coming to a standstill in the middle of the old severn bridge; due to high winds the traffic had been completely slowed to stop for what seemed ages.   We watched a “moon-bow” break across the stormy clouds above us as, either the car,  or the bridge itself rocked incessantly up and down in the high wind; it was a very unpleasant sensation! 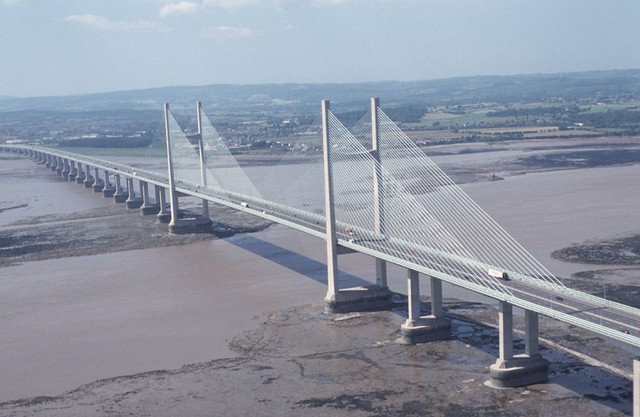 I had visions of when we were back to “normal” this week  of getting a few jobs done in the garden, but it  is still far to wet to contemplate anything.  Until the poly-tunnel is replaced I can’t really get on even planting up seeds and getting a bit sorted out for spring.  I really wanted to get a tray of broad beans germinating.  I find that the only way to beat the slugs is to start these off in a pot or tray in the poly tunnel.  They get eaten if planted straight into the garden.  None of the window sills in the house are very conducive to plant germination.   Goodness knows when the poly tunnel replacement can be done if we are still having all this wind and rain.  I can’t even get out there to remove the remains of the old one as the bottom of the polythene sheets were buried into the garden by “himself” for stability!

I have had a good pull on  this years crop of leeks.  During the winter I always seem to have the soup pot on the go; it’s a satisfying and relatively healthy lunch  a good stand-by.  Leek and chicken today.  There has  also been a reasonable crop of parsnips; not digging those at present – they have a ton of mud clinging to the roots – I must confess it is easier to buy them at the moment than wash them, me, my boots and the garden fork  (sac religious !).  Looks like plenty more sprouting broccoli to come. Lovely.

In the flower garden the crocus are coming up all around a  raised bed by a large acer and underneath the bramley apple.

(acer drummondi – beautiful variagated leafed  tree. I planted a specimen about 20 years ago when I started the garden below the house as I fell in love with spectacular green and cream of the leaves, which gradually turn to yellow in autumn.  I also have an acer “flamingo” which is similar but a narrower green and white leaf edged with pink. The “flamingo” I bought at a Gardens World Exhibition thinking it would stay quite small, but it is now a 30ft tree!  It seems to revert to it natural dark green quite readily and GOS is frequently having to remove branches for me.  He does enjoy getting stuck into a job with his saw and loppers.  A little too enthusiastically on occasions when I’m not there to hold him back. We have had a few, what I consider  a ” massacre” and what he considers “tidying up”!!

The crocuses appear as little explosions of white and purple against the bare earth. Unfortunately, they are being well battered by the wind and the rain. The hellibores are standing up to the rain quite well.  The snowdrops are at their peak;  growing in quite large drifts now against a couple of the hedges at the edge of the lawn and the daffodils behind are not far from being open.   I have had them open for  St. Davids Day before now and that is early for here because the property does stand at around 600ft above sea level , but I think this year’s blooming will be a record breaker.  All down round Bristol airport the daffodils were well out and someone had been cutting the grass below the terminal building.  All the plants were well ahead of us here.

GOS is at “Rotary” tonight: my meeting has been cancelled; no-one wanted to turn out in this weather tonight  – so I only have myself to cook for . . . . . .  another bowl of soup I think and a bit of telly.