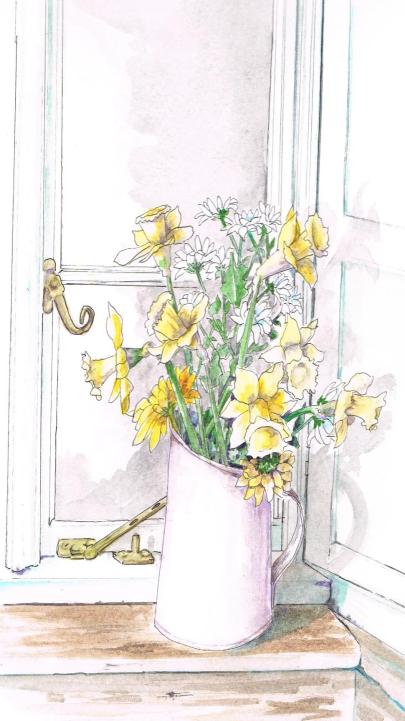 Well we have had a little spring sunshine in between the snow showers. I did pick a lovely bunch of daffs in the garden the other afternoon. We have several different varieties, one of which is a very unusual double petalled daffodil. So cheering and”sunny” on the sitting room windowsill. Picking daffs and digging a few leeks is about as much as I have done in the garden department.  It’s been so cold and wet out there most of the time this week.

There is considerable whiteness once again on the high tops. A changeable week weatherwise.  Friday was a filthy day of rain and snow with a bitterly cold wind.  In between, when the sun has come out, in sheltered spots, it is pleasantly warm.  When riding out (in multiple layers of clothing to keep warm) it is noticeable the hill is starting to dry out in odd places.  Some of the hollows that hold water are drying,  leaving the frogs spawn vulnerable to attack by the crows.

I have been to the dentist twice this week and, hopefully,  my treatment is now complete for the time being.  (Several bits of me seem a bit “crumbly” – this getting older is a bit of a ……)

I go to an NHS dental outfit run by a  big private company, which has changed a couple of times after a “buy out” I guess.  The staff change very frequently as well, which caused some chaos at my first treatment appointment (first patient of the day) ,as the dental equipment had  not been put ready and neither the dentist or his nurse had any idea where anything was. By the time we got started the dentist was running about 40 minutes behind. I am sure this would cheer his following patients.  Despite all this, the dentists, of various nationalities, all seem very experienced.  A new one on me this time though;  in an effort to keep the tooth dry, the dentist put  a small, blue plastic apron on clip across the whole of my mouth. Most peculiar sensation (gagsville!) My current dentist is a very personable young man who chats away as if you are an old friend.  A very one sided conversation I’m afraid when ones mouth is full of clips and plastic!

The current company that runs the practice seem obsessed with “feed back”.  Half the questions, as far as I am concerned,  on these pro forma are never the right ones. Who gives a monkey’s if the “waiting area is pleasant”  when you are in agony and anticipating treatment!  I expect its all to meet some sort of government targets; anyway a day after my final appointment I received a text asking if I would like to respond to their telephone  evaluation questionnaire.  ” How likely are you to recommend your practice to family and friends” etc. “Standard network rates apply”.  I should cocoa.

GOS and I both went to the Parish Lenten Lunch this week; hosted by the Mother’s Union to raise funds for their charity project.  The ladies of the Parish had made the old village hall look very inviting:  the tables beautifully laid: white linen and spring flowers.  Not so sure about the “simple Lenten lunch”.  The “guests”  were treated to the choice of four different home -made soups, home made bread and a huge variety of specialist cheeses.  A lot more sumptuous than our usual lunchtime fayre.

I’m involved myself this coming week in putting on an annual fund raising supper; again in a local community hall. My main task running up to the event is selling the tickets.  This involves numerous emails, phone calls and “arm twisting”.  The person who is organising all the cooking (a hot main course)  is anxious to know how many guests are expected, but getting people to confirm numbers is a nightmare!  Some of the worst offenders are on the committee let me say.  I am sure it will all be alright on the night.  The evening  usually does quite  well on the fund raising front, but jolly hard work as we aren’t that many  to run the event.

Sunday just gone was “Mothering Sunday”.  The shops have been preparing for weeks turning the whole thing into a huge commercial exercise and an excuse for crass sentimentality.  Some of the postings on FB were positively nauseous.  However, perhaps I am a terrible hypocrite – I was very thrilled when the florist knocked on the door, early Saturday morning, with a bouquet of tulips from “my two”.

But it has, as with a lot of things today, gone a long way from the origins of the event, and is now a big money making thing.   Also a million miles away from those lovingly crafted little cards made in the infants class in school when the children are tiny. Those little things always mean so much.

I always understood originally  the day was given to girls in domestic service to attend their home church with their own mother’s. A rare privilege in years gone by to get any sort of holiday day.

I have been discussing holidays today with the Swiss contingent – we have to work out when we are visiting again …… umm…. calendar is beginning to fill up….