And another dry and sunny day in prospect today. I will have to start getting organised and work my way through my long checklist for the garden.  I did manage to get a little spraying and grass cutting done.  Several corners of the garden have become a bit neglected and untidy.  The “wild” area, for one,  on a bank above the stream is being invaded by brambles, smothering some of the meadow species.  I really want to get some more “bee attractants” in this spot and  I have some comfrey plants to go in when it warms up a bit more. It is quite damp at the bottom where the bank edges the stream, so hopefully they will do well. There is another spot, backing the old pig sty, that desperately wants sorting out. There is a lot of old dead, woody  kerria japonica which needs clearing away and the bed needs replanting.  Kerria is a lovely, early flowering shrub with bright yellow “buttons”of flowers.

I brought a cutting nearly 30 years ago from our previous garden which grew and spread, but this is now well past it’s sell by date and is mostly dead. Hopefully I can find a little bit of green shoot and salvage a cutting or two for  replanting. There is also a very vigorous honeysuckle growing through an ancient elder berry in this corner: that could do with a bit of a “hair cut”as it is now  almost blocking the gateway beneath it.

What ever is planted in the beds in my garden has to be fairly robust to survive the chickens.  I do love to see the poultry running round having the freedom of the whole place.  But, they do a lot of damage to the plants scratching in the beds and dust bathing.  They scratch debris and occasionally sizeable stones out of the beds onto the lawn, so you have to be careful when grass mowing.  So far I have been able to keep them out of the vegetable patch!  I have given up trying to barricade the muck heap in an effort to deter the chickens from spreading it all around the “back paddock”.  They were just burying the barriers with piles of scratched up manure.

Today, when emptying my barrow after mucking out the horse, I noticed a large patch of fungi had suddenly appeared in the manure heap.  Little, grey toadstools about three or four inches high.  Can anyone identify them? 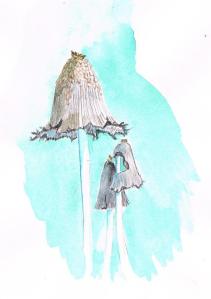 They are growing in fairly fresh manure, not in the well rotted, older stuff.  They are very delicate; the caps almost like a translucent veil. An “inkcap ” of some description I think.

Riding out was a real pleasure Saturday.  I had a two and a half hour “spin”out with a friend. (Just a little delicate after hard work and a late night helping host the fund raising supper.) No wind, no rain.  I guess we covered about 12 miles in all; mostly across open hill where you can keep up a steady canter apart from  when crossing a few deep wet patches. The route we took passes close to a stand of Scots pine ( pictured above), where stands the remains of some enclosure walls.  The pines were planted by the  legendary  welsh cattle drovers, on their way from west  or north Wales to Hereford, to way mark stopping places or river crossings on route; these trees are easily identifiable from afar.  Before the advent of the steam train cattle would be walked all the way to London for slaughter.  It was not only cattle that were walked to market; geese and  turkeys  as well.  The cattle would be iron shod, similarly to horses, the geese given leather boots and the turkeys had their feet tarred to protect them on the long journey.  A long way from popping to the supermarket for a plastic wrapped piece of meat!

At one point on our ride a hare literally bounded up and away from between my horse’s feet.  They are so well camouflaged you’ll rarely spot them unless they are running.

The horse took no notice whatsoever 0f it, but today we startled one in the crispy, dry bracken and it “rattled” out of its hiding place, spooking the horse, who spun round in a panic. Once it is up, it can run incredibly fast, up to 35 miles per hour, although this is saved for escape and they generally lope along at a much more leisurely pace.   Anyway, I managed to stay on board when it scooted out of the bracken.

I expect you’ve heard the expression “mad March hares”: I have never seen them “boxing”,  but I did see 3 last year, playing “chase me Charlie”, galloping round after each other in mad circles.  All part of the “mating game”.

Talking about the mating game, there is a love-lorn peacock wandering the parish.  He moved to a near by farm with his owner and  one other peacock last year,  but, unfortunately, neither of them settled in their new home.  One has disappeared altogether; met an untimely end I guess: but his pal took up residence for the winter in the cattle sheds of a neighbouring farm.  He is now on the move again, last heard calling pathetically from the churchyard.  Poor old thing. . . . . .