The temperature variations during any day this week have been exceptional.  I rode out this morning with a friend starting in warming sunshine (pal didn’t have a coat on, just a body warmer ).  After about four miles we entered the forest and the sky went a bit cloudy and we experienced some hail,”pinging”through the tree canopy,  the temperature dropping considerably. We had about half an hour trotting round the forestry tracks and when we finally emerged from under the trees back onto the open hill the whole world had turned white!  The ride for home was fairly slow and quite treacherous.  As the horses walked the soft snow was “balling” in the hollows under their hooves so for every few steps they were tottering on snow stilettos until the snow ball was thrown clear.  Then other balls would start to form again and again.  Eventually when we got lower, to a road, where the lying snow petered out.  Back on the shelter of the lanes it was really warm again. Here the verges are beginning to look truly spring like with a lush growth of wild flowers starting to bloom.  On the lower parts there are golden dandelion and celandine, bluebells, pale blue forget-me-not,  the delicate pink of ladies smock and the white stars of stitchwort. On the higher banks, tucked under the hedges,  a mosaic of yellow promise, white wood anemone, violets and deep blue bugle (“self heal” as it’s also called).  A plant well known to herbalists for its healing properties.  It’s noticeable however, how far behind we are here with the hedges not yet in leaf, compared to where we were in Newport earlier in the week. 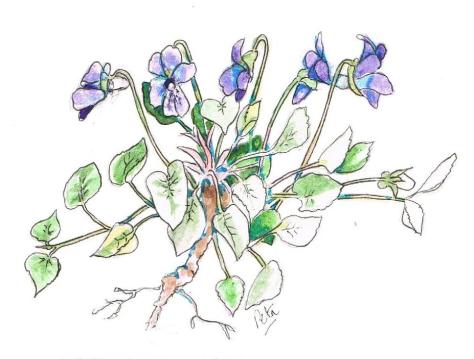 GOS and I have been trying to make the most of our newly acquired NT membership. Over recent weeks we have “done” Croft Castle, Berrington Hall and this week Tredegar House in Newport.  And as it was my birthday I was treated to a very nice lunch” as well!  So far I think I was most taken with Croft Castle which has the most wonderful, panelled Tudor hall at the entrance with a fabulous portrait of Elizabeth I facing you as you walk in. The house felt the most like someone’s well loved home.

I have also recently visited Aberglasney in  Carmarthenshire with “the girls” from work.  Another originally medieval property that was “rediscovered” and renovations of the gardens began in 1999.  GOS and I visited shortly after work started when it wasn’t much more than a building site.  The transformation in the intervening 16 years has been sensational.  The gardens, of various genres, are beautiful; packed with spring flowers at the moment.  Just outside the ancient town of Llandeilo it is only one of a host of places of historical interest in the immediate area.

As it has gone so cold the grass is not growing so the farmers locally, who would normally be moving ewes and lambs to lush spring pasture, are struggling to provide the stock with enough grass and many are having to supplement the feed more than usual.  Ewes and lambs have been turned out on the fields opposite us and if they spot me or hear a vehicle they are bleating hungrily.  Our few sheep are are on pretty good grass and the lambs are growing rapidly, but if they see me protest their hunger. On going to check them recently one of the lambs (the biggest and wildest one of course) had managed to get into neighbouring farmer’s field.  It was beside itself now trying to get back to Mum.  How to get it back on my own? Himself being off golfing.  As it was I had some sheep feed with me so the rest of the flock followed me down to the dividing wire fence keeping lamby interested and close to the fence.  I climbed over and tried to corner it, but this was difficult due to the thick and over-hanging bushes. After chasing the blessed thing up and down for a bit, and nearly grabbing it a few times,  it decided to try going through the fence and I managed to rugby tackle it and get a good hold on it.  With some difficulty wriggling, protesting lamb was unceremoniously hoisted over the fence whereupon it dashed up to mum, nearly knocking her off her feet in its rush to get at some milk.  I can see it’s going to be another Houdini! Usually the lambs know where the hole is in a fence or hedge and get back the way they came, and despite walking the fence a couple of times, we can find no onvious escape routes.  We have no idea how it was in the neighbours field.  Sheep … ****!

This lamb’s mother came to us in a strange way herself.  5 or 6 years ago I guess. In our field, adjacent the church, we had put ewes and lambs in early May.  On checking them one morning we discovered we had an additional ewe lamb in the field.  Very obvious as it had a black face and all ours are white.  We estimated it was about 3 weeks old and would have been pretty well still on an all milk diet and had no identifying marks.  Our ewes would never let it suck.  There was no mum to be found anywhere in the churchyard or gardens nearby.  Though someone did think they had seen a ewe with twins in the churchyard some days previously.  I rang all the neighbouring farmers.  No-one had this type of sheep. So “Lucky Lucy”, as she became christened, unclaimed, stayed with us.  She survived despite her depleted diet and is now one of our all time best ewes.  BUT a is a very clever and canny escapee!