Well it was certainly wet enough to snorkel for a couple of days!

I had a real “horsey” week.  Five of us took our horses on a three day trail ride round the Black mountains; stopping B&B on the way, with grazing arranged for the four legged members of the party and luggage sent ahead.  We were joined by two others for our second day (one an American lady over in the UK for a riding holiday)   And it was quite a “party”; we were frequently crying  helplessly with laughter!!  We set off on the Monday morning in warm spring sunshine, quickly climbing to steep, rocky paths to the first “top”, a fairly narrow ridge, allowing us splendid westerly views of the Beacons. By lunchtime we had dropped down to a valley, following a winding stream through ancient, spring-green woodland,  a haze of vivid blue, as every bank was thickly carpeted with bluebells. The scent of them in the warm sunshine was glorious. 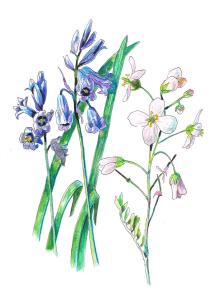 Following our picnic lunch in a woodland glade we were climbing steadily once again to reach the the lower, rolling slopes of the Sugar Loaf.  Fast riding then until we dropped down mid afternoon through gnarled old oak  and beech woods, heading for the overnight stop.  Just in time!  Thunder rolled across the valley and the heavens opened.  We needn’t have washed the horses off as both we and them were soaked in seconds. And that was how the weather was, combined with fog, until a couple of hours from home on the final day; but it never really spoilt the holiday atmosphere. My horse tack, which was stiff with the wet is now dry and and oiled and hung up.

The Saturday before this sojourn I had been instrumental in organising a fund raising “fun ride” on my home patch. Something I have organised now for a number of years  This entails, in our case, laying a twelve mile trail for horse riders to follow, interspersed with optional jumps.  Fifty three riders enjoyed and got round the course safely on the day – always rather stressful until the last participant checks in;  as it is always the unexpected that catches you out!  One year a girl got bucked off into a tree before starting the course and an ambulance had to be summoned.  Another time some people had not tied their horses properly  on return and they ran into a cattle grid separating the parking field from a road.  How or why one asks?

From my prospective the other hard bit of the day is laying the trail the day before.  With experience we have found the most effective methods is to lay a trail of white lime over the ground off the back of a quad.  Wearing goggles, mask and hat I disembark from the quad, after 12 miles trail laying,  looking like a demented snowman.  The windier it is the worse it is and if it is raining in the slightest the lime sets hard.  We must be quite a sight – this year we didn’t half surprise a walker sunbathing; resting in one of the stone hole hollows on the edge of the track  on our route !

So that is why I am a little late in catching up on my journal.  Unlike one of the younger members of my riding party I am unable to ride and text/type at the same time!!  The photo stops were frequent to enable her to update her facebook page as we went! That was until the rain stopped the phone camera working!

Now home I have been playing catch up.  The grass has grown on the lawn like mad with the warm, thundery wet.  I have mown and am just having a break from edging.  The pots of bedding I had in the poly-tunnel I dragged out so they could get rained on and not have to be watered by himself whilst I was away, but now I am covering them up again every night as it looked like frost.

Germination in the poly tunnel has been a bit spasmodic, but last I have a few courgettes coming on and one squash (which will be enough as they take up a huge amount of room in the garden.)  I may yet have to buy runner bean plants nothing seems to be happening on that front.  There are four rather feeble looking tomato plants, but I have repotted them and they look a better colour.  I may have a couple of cucumbers if I can keep the slugs off – one has succumbed already.  The row of mangetout are picking up and the first row of early potatoes are peeking through the soil.

Everywhere is a riot of colour after the rain. The verges are full of wild flowers as well as the bluebells and my apple blossom is just about to break; the “crab” by the stream is laden with deep magenta buds.  I really planted this for the birds as well as the colour, but it was a poor variety (can’t remember what), the fruits are miniscule about the size of a rosehip.

Great fat bumble bees keep coming into the house – lumbering round and round until they are rescued and put outside again.  Just been looking up bumble bees now, there are a good few varieties about 250 types of bee in the UK.  I know son’s girlfriend is really into bee conservation and was photographing or small red tailed bumblebees last year, but they are quite small. These are monsters in comparison. I’ll have to see what ours are? or if we have more than one sort.

Hopefully they have lots of plant nectar to feast on with the proliferation of flowers in the area.  All the margins of the garden are full of  wild flowers. The yellow deadnettle are proliferating under the hedges round my composting area. Also known as Yellow Archangel, Thomas Culpeper, in his Herbal, commends the use of this plant for sores and ulcers!  Hope we never need that one.

Right back to work on the gardening …….