As I write this (taking a break from trying to paint the delicate, fragile petals of rhododendron . . .a bit taxing . .  argh) the acrid smell of slurry drifts through the open windows. Not one of life’s pleasures!   Until this evening it has been lovely to wander round the garden at dusk, when I am watering. The smell of mown grass,  blossom and the very sweet smell of broad bean flowers heightened by the warmth.    But over the last few weeks several of the farmers round and about have been spreading waste from the local anaerobic digester. This afternoon it was going to a field almost right next to us.  Niffy to say the least on a very hot, sultry summer afternoon. The process seems to involve parking a large tank at the bottom of the road and then a shuttle of tractors towing smaller tankers hurtling up the road to another tank to  spray the prescribed field.  The odour should dissipate shortly anyway as rain is forecast for tomorrow and I am sure this waste is better than nitrates on the land.   I hope it does rain, much  needed  water; the veggies are looking more hot and tired than us.

We went to Hergest Croft when the family were here – hence the current “thing” about rhododendrons.  The gardens there are famed for them and they were certainly spectacular; in full bloom,  when we visited.  We had a lovely afternoon wandering round the beautiful grounds.  The walled veg garden is most impressive as well and, when we went, the central grass path was edged with a mass of aquilega in a myriad forms and colours. Very pretty cottage garden effect. 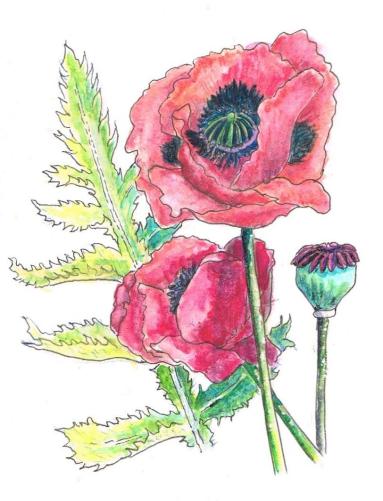 Here, at home,  the poppies are coming into their own, the iris are just coming out and a lot of the flowering shrubs starting to blossom.  June is certainly “busting out all over”.  I had not ridden the horse for 10 days because  of the family being here and the first day back out on the hill I was astounded at how the bracken had suddenly emerged; in places it was knee deep already.  As I rode out this morning the hill was awash with bird song.  Larks hovering high above, the distant calls of yellow hammers (“a little bit of bread and no cheese” as it sounds) from the hedgerows on the margins, stone chats that “clack”, when disturbed on your path as you go, flitting, from bush to bush;  together with a lot of other calls that merge into one another. A clattering of magpies and crows, the odd honk of a raven and far off the occasional call of the cuckoo who is still around.

Here in one of the fields at home over the weekend there has been an almighty ruckus.  Three newly fledged crows have been practicing their flying.  Launching themselves awkwardly off the lower branches of the adler trees that line the paddock in an effort to follow their parents. Then landing from time to time all together in a heap on the close cropped grass noisily demanding to be fed.  Mum and Dad rushing backwards and forward all the while.  They were still out there today squawking, shouting for attention from their frazzled parents.

Every day over the last few months  we also have a visit by a red kite.  It circles endlessly round and round, floating over the yard, buildings and fields opposite us.  From time to time calling with a very distinctive high pitched whistle.  Red kite must be pretty smart birds.  Each year as soon as the forage harvesters are here in the fields cutting grass for silage one or two have appeared as if from nowhere, silently circling to follow the machinery, waiting their chance to eat some poor unfortunate creature that got in the way of the harvesting. But now this daily visitor seems to have claimed our patch as his territory. 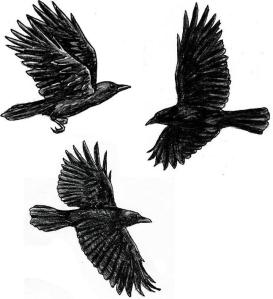 When the little one was here last week one of her fascinations seemed to be with any sort of “stinky poo”.  She would trail round after me “poo spotting” in the horse paddock.  One of my daily chores is remove these piles from the grass.  It keeps the grazing sweeter on a small patch.  Horse muck can quickly sour the ground, which can become very weed ridden, and it reduces the risk of intestinal worm for the horses.  Though hopefully poultry pecking about in the paddocks also helps on this problem.  Twice a year my horse gets a laboratory “poo”worm count rather than unnecessary medication ; she only gets dosed after grazing away with others on well used pasture; like when on holiday recently.

Apparently,  when back home  in Switzerland and first morning in playgroup little one made a bee-line for the plastic wheelbarrow, grabbed a plastic saucepan for a shovel and announced she was going “poo picking” for Mama!  Nothing like training them young…