We are just recovering from a toddler fueled couple of weeks!  I have been in the throes all day of stripping and washing bedding, tidying away toys and generally getting back to “normal”in the house.  It has been great fun ( if quite tiring!) to take all the family away as well for a few days at the coast; giving our little granddaughter her first taste of a british seaside holiday.  We were blessed with wonderful sunny weather for the whole  holiday  and were able to make the best of the beach as well as having a couple of family cliff -top hikes. The youngsters even went in the sea a couple of times!  But they did not stop in long I can assure you!  If not the cold, the jelly fish floating about put them off .

We had many happy summer holidays on the same part of the Cardigan coast when our two were very small and it was lovely to repeat this with our little granddaughter. Her excitement was a delight.   It has been a long time since I built sandcastles!  As it was so early in the season the roads and the beaches were reasonably quiet so it was lovely.  Some of the single track roads down to the sea are fairly precipitous and very narrow so the lack of traffic was a bonus.  We, ( that is GOS and I,  granddaugher, our daughter and son in law, son and his fiancee) based ourselves in a cottage in the  pretty, little town of Aberporth which is right on the coastal path;  giving access to other beautiful beaches, which we know well from frequent visits in the past.

The cliff top paths here boast stunning vistas across the Cardigan bay and views along the  rocky coastline.  If you are lucky at certain times of the year dolphins can be spotted in the bay.  (Aberporth has a beautiful sculpture of one on the front),   These stunning views are often glimpsed between between idiosyncratic tunnels of stunted blackthorn and other trees which cling to the cliff tops.   And bathed in very warm  May sunshine the gorse bushes, which also lined much of our way on our walks, were exuding a thick and heady smell of coconut which was  interspersed occasionally by the sweeter scent of the bluebells which were also in full bloom. The fragrance was wonderful.   I felt to lucky to be enjoying all this.   The coastline is very much unspoilt and not at all commercial.  My favourite place to walk; the coastal paths of Wales.

I read that gorse bushes are highly flammable, and in many areas, in years gone by, bundles of gorse were used to fire traditional bread ovens. The ashes made an excellent soil dressing. Another use for the ashes, which are rich in alkali, was as a detergent in washing soaps.  I know, locally, the fresh young tips are considered a tonic for horses. 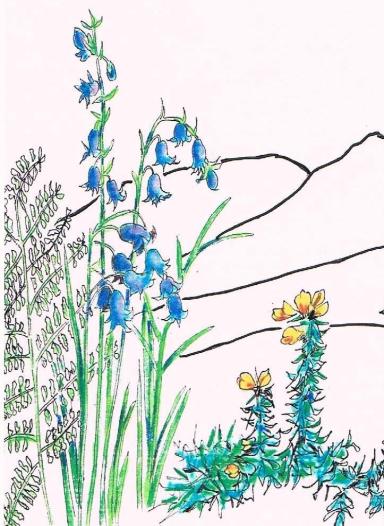