Feeling a lot better, and being able to tolerate sitting for a while longer I have got back to doing some painting. I have had to spread my stuff all over the dining room table to work at a comfortable height! I ‘m a bit chaotic when in painting mode, but at least watercolour stuff is easily cleared away.

Very much inspired by the Society of Botanical Artists 2019 exhibition catalogue which I have been viewing on line, I have been picking and painting flowers from the garden. I hope to get a couple of paintings framed ready for the art group exhibition next week.

l also took a few more photos and I thought you might like this one below of a rose. It is always magnificent with long arching purple branches of pink flower. It has been a tremendous growing season. In fact, the ornamental shrubs and borders (and weeds) have got so carried away I have someone helping me with the garden whilst “incapacitated”. Otherwise, by next year, it would be a gargantuan task to get it all to rights after a season’s neglect.

My son and his wife came last weekend and had a bit of a tidy up in the veg patch as well, which was a great help. We are currently eating mange tout and new potatoes. There is a large amount of green salad crops which I planted a while ago and the broad beans aren’t far off being ready to pick. 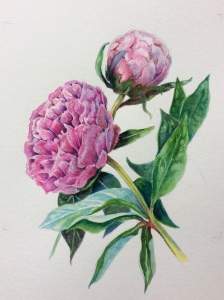 (GOS has his hands full with the twice weekly lawn mowing necessitated at the moment by the amount of growth in the grass. As I write this he is outside hedge cutting).

On Thursday I had a lovely afternoon out with the “Caring for God’s Acre” project. A friend picked me up so I could go along as planned, as I agreed to participate some while ago. This day was run by a charity who are currently recording the species in churchyards. Our venue was a beautiful local churchyard, set high on a hill, overlooking the river Wye; surrounded by an organically farmed estate and associated woodland.

Collecting and collating data to demonstrate the importance of burial grounds for biodiversity and make that data accessible through the National Biodiversity Network Atlas and the Church Heritage Record/Church in Wales data systems. (from the web site).

It was fascinating working with the two experts. At the end of the afternoon I believe we had recorded 86 species of flowering plants and grasses. Although not visible at this time of year, the Rector pointed out an area under a yew tree where “Earth Stars” grow in the autumn. This is a type of puff ball fungus and, as it was, one of the plant recorders had some old dried ones with him, which he very kindly gave me. I knew nothing about these never having come across them before. 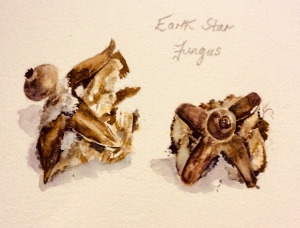 They are the most peculiar looking things – most aptly named indeed . . .

Resolved to return in the autumn to find them growing.