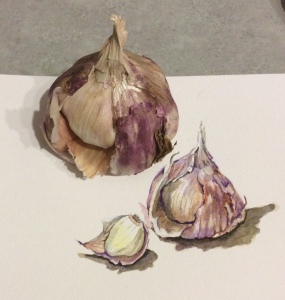 Above is a photograph of some garlic I purchased today sitting on my sketch pad next to my painted, watercolour interpretation .

Today the “Food Festival ” was in town and I popped in to have a look round and catch up with friends who were helping sell flour from the local, recently restored water-mill. The market hall was packed with artisan vendors of every description. There were a lot of variations on a similar theme – cheeses, wines and ciders, pickles and cakes particularly. However, there were a few standout stalls; charcuterie, freshly dressed crab, ferments and close to the entrance a traditional, french, onion “Johnny”. I came away with a string of the most gorgeous, huge garlic bulbs. Hence the sketch!

“Onion Johnny” was a term given to the French onion sellers of Brittany who cycled round the streets of Britain, strings of onions tied to their bikes, knocking at doors and making markets more exciting!

Berets worn at a jaunty angle, Gaulloise cigarettes hanging from their lips, bicycles smothered in plaited strings of onions – each of which weighed between one and two kilogrammes – French onion sellers were once a familiar sight on the streets of Britain, plying their trade from door to door, from the Channel ports to as far north as the Orkneys and Shetlands.

I have been endeavouring to walk at least an hour day as part of my accident rehabilitation and I have, at last, been given some light physio exercises. With GOS’s company, earlier this week, I managed my first “proper ” mountain walk – only three miles but I felt it was quite an achievement. So, after shopping this morning, I got my walking boots and walking stick from the car, and armed with my camera, walked some of the river and canal towpath – making the most of a few rain free hours. More inspiration for painting!

The exposed roots on that tree were simply beautiful.